Everything You Need to Know About Fingerprints

If you have ever watched an episode of a crime procedural or followed any true crime cases, you are likely familiar with the use of fingerprints to identify people. Every person on earth has unique fingerprints that can be used to trace their movements and identify their presence. Fingerprints are an invaluable tool that helps law enforcement officials solve crimes and convict criminals in court.

But have you ever realised that fingerprints also make lovely mementoes? After all, who doesn’t love the tiny fingerprints (or footprints) of their baby? Or even the beautiful prints from their cat or dog? Fingerprint keepsakes are also perfect as a romantic gesture – they are one in a million (or one in 64 billion, to be exact).

Have you ever wanted to learn more about this fascinating topic? We’ve compiled a guide to everything you need to know about fingerprints.

The pressure placed on a foetus’s developing fingers in the womb forms their individual fingerprints. Each of your fingertips is embedded with tiny valleys, ridges, and whorls (collectively called friction ridges) that are utterly unique to your body. The friction ridges include pores that secrete sweat and oils and therefore leave behind residue.

There is less than a one in 64 billion chance that you will have the same fingerprints as another person – they truly unique! They are more individual to you than even your DNA sequences.[1]

While you also have similar ridged areas on your hands and feet, fingerprints are the most popular for identification and solving crimes. That is because we tend to touch everything with our fingers, and we, therefore, leave many prints behind on the surfaces we encounter. As a biometric characteristic, they are easy to store and analyse.

What Are the Different Types of Fingerprints?

There are eight common fingerprint patterns that investigators use to identify people and solve crimes.[2] 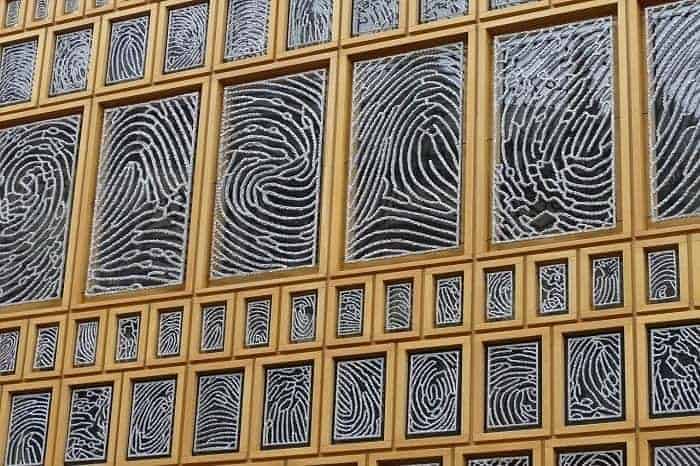 Nearly 70% of all fingerprints analysed include loops, which are ridges turned backwards and that do not twist.

Named for the radius bone that connects to the thumb, radial loops flow in the direction of the radius. They are quite uncommon and are usually found on the index finger.

Ulnar loops are named for the ulna bone in the forearm – they flow down towards the same side as the little finger.

Whorls are found in around 30% of fingerprints analysed by experts. In a whorl, the ridges turn at least one full circuit.

A plain whorl is the most common. It makes a complete circuit with at least two deltas, making them a circular or spiral shape.

Central pocket loop whorls include at least one curving ridge, an obstruction at right angles to the line of flow, and two deltas. It will be circular, spiral, oval, or circular.

Accidental whorls have two distinct patterns that include two or more deltas. Since they do not match the specifics of other whorl categories, they are grouped together in a ‘catch-all’ group.

Arches only occur in around 5% of all fingerprints, making them the rarest category of features. These patterns do not include any downward turns and run continuously from one side of the finger to the other. They do not usually include a delta.

Plain arches start on one side of the finger, and then cascade upwards, resembling an ocean wave. They are the simplest fingerprints for amateurs to recognise and are often included in children’s science kits.

The tented arch has smaller up-thrusts in the ridges near the middle of the finger, resulting in tent shapes that are also easy to recognise.

What Is the Process of Fingerprinting?

Law enforcement agents look for two different types of fingerprints at a crime scene. Visible prints are found in blood, dirt, mud, or any other substance that will hold an impression. Latent prints are invisible to the naked eye or can only be seen in a particular light, and are made on glass, plastic, and other hard surfaces. Investigators use tape, lasers, specialised cameras, or dusting powders to see and ‘lift’ them.

What Is the History of Fingerprinting?

People around the world have noticed the distinct patterns on our hands and feet for millennia.[4] In the second millennium BCE, Babylonian officials fingerprinted criminals! They were also used for signatures in ancient Babylon, with kings and officials imprinting their thumbs or fingers in wax to seal contracts. Similarly, in Ancient China, officials used inked fingerprints in court documents, although this may have just been symbolic.

The first documented case of fingerprints being used to solve a crime dates all the way back to Ancient Rome. A bloody palm print found at the scene of a crime was used to convict the killer. His palm was examined for a match, and this evidence was used against him in court.

In the 19th century, an English magistrate called Sir William Herschel pioneered fingerprinting for signing documents, creating a finger register in Jungipoor, India. Soon after, a Scottish physician called Henry Faulds wrote extensive research papers on the potential for fingerprinting, and his seminal paper was published in ‘Nature’ in 1880.

Soon after, Alphonse Bertillon, a French police officer and biometrics researcher, developed a system dubbed the Bertillon System. It used the measurements of criminal’s body parts, including fingerprints, to track and categorise criminals. It was a flawed system, causing Argentinian police officials, including Juan Vucetich, to reject it and search for better solutions. He began to develop his own system and was able to solve a grisly multiple murder in 1891. He called his system comparative dactyloscopy, the term we still use today.

By 1896 the system had gained popularity around the world, and the National Bureau of Criminal Identification was founded in Chicago (later Washington DC).

Do Identical Twins Have the Same Fingerprints?

Why Is Fingerprint Jewellery So Unique?

When you love someone, you love their individuality. What better memento to celebrate their individuality than their fingerprint? A piece of fingerprint jewellery is as unique as your loved one – you can guarantee that absolutely no one else on earth will have the same wonderful necklace or ring as you. Imagine everything that you love about someone encapsulated in a single fingerprint – it’s perfect.

The study of fingerprints has a long and storied history that helps us to understand the evolution of law enforcement and detective work. Fingerprints have a truly unique nature makes them the perfect keepsake that will remind you of a loved one’s individuality. This is a genuinely fascinating field of study – have we piqued your inner detective?

Crime and Investigation. (2018). The History of Fingerprinting. [online] Crime + Investigation in the UK. Available at: https://www.crimeandinvestigation.co.uk/shows/crimes-that-shook-australia/articles/the-history-of-fingerprinting [Accessed 22 Jul. 2020].

This website uses cookies to improve your experience while you navigate through the website. Out of these, the cookies that are categorized as necessary are stored on your browser as they are essential for the working of basic functionalities of the website. We also use third-party cookies that help us analyze and understand how you use this website. These cookies will be stored in your browser only with your consent. You also have the option to opt-out of these cookies. But opting out of some of these cookies may affect your browsing experience.
Necessary Always Enabled
Necessary cookies are absolutely essential for the website to function properly. These cookies ensure basic functionalities and security features of the website, anonymously.
Functional
Functional cookies help to perform certain functionalities like sharing the content of the website on social media platforms, collect feedbacks, and other third-party features.
Performance
Performance cookies are used to understand and analyze the key performance indexes of the website which helps in delivering a better user experience for the visitors.
Analytics
Analytical cookies are used to understand how visitors interact with the website. These cookies help provide information on metrics the number of visitors, bounce rate, traffic source, etc.
Advertisement
Advertisement cookies are used to provide visitors with relevant ads and marketing campaigns. These cookies track visitors across websites and collect information to provide customized ads.
Others
Other uncategorized cookies are those that are being analyzed and have not been classified into a category as yet.
SAVE & ACCEPT

How do I send my ashes?